Skip to content
What are Calamondins? To Asians, they are limes, called Calamansi limes or limau kasturi, in Malay. Outside of Asia, they're mini oranges!
Jump to Usage Instructions Print Instructions 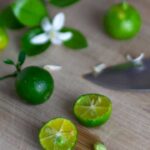 Calamondin or calamansi limes are small, thin skinned fruit that have a tart flavour with hints of bitter. They are a very common ingredient all across South East Asia.

Is it an orange, or is it a lime? It’s both, depending on which part of the world you’re in!

Citrus × microcarpa (also Citrus × mitis), the calamondin is a hybrid, a cross between kumquat, and an orange, most likely, the mandarin orange. So people outside Asia, may be forgiven (with a smirk) for calling it calamondin orange and treating it like one!

In South East Asia, the calamondin is treated like a lime. We squeeze its juice over rice, noodles, sauces, salads, and anything else we can think of. And we also make lime juice with it.

Calamansi lime juice may have originated in the Philippines, many, many moons ago but has long been a popular local drink all across the region.

In fact, the word calamansi is the anglicised version of the Tagalog kalamansi, while calamondin is from kalamunding, also in the Filipino lingo.

Called Limau Kasturi in Malay, you will not see a bowl of Malay or Indonesian noodles without the customary slice or two of this lime on the side. Or our sambal belacan, that ubiquitous Malay chilli paste or condiment, found on many dinner tables.

Where to find Calamansi?

Here in the UK, they have long been a very popular plant sold in our garden centres. When I recently posted some photos of it on Instagram, I had so many surprised reactions to it from folks in the UK.

So I pointed them all to B&Q and Homebase, 2 DIY chains that also have a garden centre attached. I’ve bought so many over the years as gifts. Spring – summer is a good time to find them. So if you’re in the UK, off you go!

They are also very easily availalble online. If you’re not in the UK, do a search for it, I know there are many sources in the US and Australia. They are usually sold as Calamondin Orange Tree.

Of course if you are in Singapore or Malaysia, you’ll find the limes sold in shops and supermarkets very easily.

How to care for Calamondin?

It’s a pretty easy plant to grow. If you live in a cold country, it has to be kept indoors during the cold months, so you want to plant your limau kasturi in a pot. It wants plenty of light, even in the winter, so if you are keeping it on a windowsill, bear that in mind. You also want to ensure it doesn’t get too cold by the window.

When your plant gets bigger, just repot it using a good compost with some perlite mixed in. Or use a citrus potting mix, as I do. It can stay out in the summer, but you must bring it in as the days get shorter and cooler.

Feed it with citrus food or food meant for acid loving plants.

How to use Limau Kasturi?

In all the ways mentioned above, basically, how you would use any old lime. And, you want to use it while it’s still green, not yellow like an orange.

However, if you do want to treat your calamondin like an orange, it makes a great marmalade, given its very thin skin. But as a lime, you can use calamondin:

As you can see from the image below (taken with my phone, apologies!), calamondin lime is much smaller than your regular Persian or Tahiti lime, with a slightly more yellow flesh. That means, you’ll need a little more than you’re used to.

I have so many recipes that traditionally use calamansi limes, but they are mostly on LinsFood, my flagship blog. As you might know, I just started this site in Jan 2021, so be patient with me!

In most of my recipes though, I don’t specify the use of calamansi limes, because they are not the easiest to come by for my global readers.

I hope you enjoyed reading this article. If you have any thoughts, drop me line in the comments below! 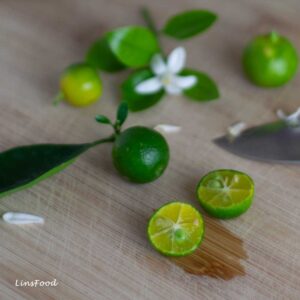 Azlin Bloor
What are Calamondins? To Asians, they are limes, called Calamansi limes or limau kasturi, in Malay. Outside of Asia, they're mini oranges!
5 from 8 votes
Print Pin
Cuisine South East Asian