Skip to content
Ikan chuan chuan is an unassuming Nyonya dish of fried fish in an earthy, piquant sauce that packs a punch.
Jump to Recipe Print Recipe 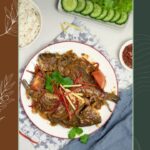 Ikan chuan chuan is a traditional Peranakan or Nyonya recipe that’s long been adopted by the Eurasian community. A classic example of a local recipe adapted by our various ethnic groups.

The name first. So ikan means fish in Malay (and Indonesian). As far as chuan chuan is concerned, no one really seems to have a clue what it rally means. It’s obviously an old Peranakan colloquialism that seems to have been forgotten over time. If you know it, let me know!

You can head on over to this page to read more about the Nyonyas (aka Peranakans) and Eurasians.

Ikan chuan chuan is a dish of fried fish in a rich, earthy and piquant sauce. It’s a pretty easy recipe to cook and there are essentially 2 parts to it:

As you can see from the rough times above, despite having a couple of parts, it doesn’t take long at all. And if you’re not a fan of frying the fish, you can also bake it or use the air fryer, whatever works best for you.

Traditionally, the fish used in ikan chuan chuan is pomfret. With its subtle, delicate and a touch sweet flavour, it’s perfect to fully take on the robust flavour of this Peranakan dish.

However, feel free to use whatever white fish you can find. I can’t get pomfret easily here, so my white fish of choice for many Asian dishes tends to be sea bream, which has a similar texture and flavour to pomfret.

Having said that, I’ve also used salmon to cook ikan chuan chuan on many occasion, and the final flavour was simply phenomenal!

If you are not keen on whole fish, you can also use fillets. To make this a little fancier, you could coat the fillets in breadcrumbs before frying them. Just bear in mind that those breadcrumbs will soak up the sauce very quickly once served.

When my mum used to cook ikan chuan chuan, she would use breaded fish fingers, which were just perfect. Before my kids went vegetarian, I used to do that on long days too, because not only was it easy, it was yummy!

That piquant sauce I mentioned? It’s made up of a combination of salted soy beans, tamarind (or vinegar), dark soy sauce and water. With salt and pepper, naturally. Let’s take a look.

If you receive my weekly newsletter, you’ll know that this is in my top 3 South East Asian ingredients list. You can read more about taucheo here.

These salted soy beans forms the basis of our sauce, adding an earthy depth. This flavour is non negotiable in ikan chuan chuan.

However, if you can’t get taucheo, a great substitute will be red miso paste (or even the lighter kind). Head on over to the article on taucheo to find out what else you can use instead.

We mash our salted soybeans up with a fork before using it in the recipe.

This is not the generic soy sauce called for in most recipes. This is the slightly darker version, and these days, should be found just as easily as light soy sauce and kicap manis.

If you really, really can’t find it, tamari makes an acceptable substitute, although it’s saltier.

If you cook Asian food, you’ll know tamarind. If not, you can read more here.

Tamarind is what adds tang to this dish. If you can’t get tamarind, use the humble clear vinegar, or Chinese rice vinegar (not wine). These are the best substitutes, not lime or lemon juice.

In fact, some families use vinegar in this recipe, instead of tamarind.

We’ve got the usual suspects here: onion, garlic, ginger and chillies, along with a tomato and fresh coriander leaves (cilantro) to finish.

I use quite a lot of onions, as I love the sauce in ikan chuan chuan to be made up of onions too. If you’re not a massive fan, feel free to use half the amount.

There is a noticeable difference in the recipe. The Eurasians’ ikan chuan chuan tends to be a little on the spicy side, with the addition of ground fresh or dried chillies. Sometimes, you’ll also find shrimp paste (belacan) and candlenuts (buah keras) being used in the paste.

This gives a slightly richer sauce, and is absolutely delicious in its own right.

I have a recipe for a red chilli paste on LinsFood that would be perfect in ikan chuan chuan to make it more Eurasian in flavour.

How to Serve Ikan Chuan Chuan

It’s a rustic family dish, and just perfect with some plain white rice to fully appreciate the rich, piquant flavours. And a Nyonya meal is never complete without the presence of sambal belacan!

You can have it as part of a South East Asian meal, with a local vegetable dish or two. You’ll find some suggestions below.

And now, shall we get cooking?

Kerabu Timun (Malaysian Cucumber Salad)
Kerabu timun recipe, a fresh and delicious Malaysian cucumber salad that is ready in minutes. It can be mild or spicy, that's up to you.
Check out this recipe!

Kangkung Belacan
Get your kangkung belacan recipe here! It's a quick and easy water spinach stir-fry that is popular in Singapore and Malaysia.
Check out this recipe!

Sayur Lemak
Sayur lemak is a quick and easy Malay and Indonesian dish of vegetables cooked in coconut milk and flavoured and coloured with turmeric.
Check out this recipe!

If you enjoy the recipe, drop me a comment and let me know. And if you are feeling like a star, don’t forget that 5-star rating!

If you make this recipe, post it on Instagram and tag me @azlinbloor and hashtag it #linsfood.