Skip to content
Get my granny's traditional onde onde recipe, with sweet potato and glutinous rice flour, the way it should be made!
Jump to Recipe Print Recipe

Onde onde are little balls of pandan flavoured dough that explode in your mouth with the sweet, aromatic caramel flavours of gula melaka.

This is another one of those kuihs that we used to sell when we were little. My granny had a menu of different local foods that we regularly made. Some, like goreng pisang (banana fritters) and nasi lemak, were made on a daily basis.

Others, like jemput jemput and today’s onde onde we’d make on alternate days, to allow us to sell a variety of goodies over the course of the week. So there are so many local recipes that are just imprinted on my mind, never to be forgotten, and this is one of them.

These little green balls of chewy goodness are commonly found at food stalls selling tea time treats. They are also especially popular during Ramadan for Iftar, the breaking of one’s fast.

It’s not too difficult a recipe, it just requires a few steps. There are also a couple of different varieties out there, mainly in the starch used. The traditional onde onde recipe in Singapore is made with mashed sweet potato and glutinous rice flour.

But the more modern variety, probably an influence from the Japanese mochi and especially popular in Malaysia, only uses glutinous rice flour to make the dough. In Malaysia, onde onde is also called buah Melaka, which is also the name of the Indian gooseberry, amla. Perhaps because of the colour and the fact that it has gula melaka (palm sugar).

Oh, and they are called klepon in Indonesia.

These days, you’ll also see these little guys in a variety of colours. Using buterfly pea flowers will give you blue onde onde and using purple sweet potato gives you purple ones.

We’re making onde onde with sweet potato, my granny’s recipe and just the way I’ve made them a gazillion times, growing up in Singapore.

Incidentally, if you see it spelt with an h, as in ondeh ondeh, and are wondering why, that’s the old Malay spelling. The letter h is now redundant in so many Malay words.

How do you pronounce Onde Onde?

The recipe requires only a few ingredients, which we’ll look at in a bit. To give you an idea of what it takes, and how long, I’ve laid down the steps, accompanied by the rough times. To cook onde onde, this is what we’ll be doing:

That’s it. Still with me?

Let’s take a look at the ingredients we need to make onde onde, shall we?

As mentioned earlier, using sweet potato in making onde onde is the traditional method,  especially in Singapore, and to me, gives the best flavour. Using just glutinous rice flour is a quicker method (perhaps that’s why it came about?) but the end result tastes just like kuih kochi or the Japanese mochi, and not really how traditional onde onde should taste.

I tend to use either white sweet potato or the orange variety. The latter is more readily available to me, and gives you onde onde that lean on the side of khaki once cooked. But still green. In the video (should be out in 24 hours), you see me making onde onde with 2 different varieties of sweet potato, white and orange.

If you use purple sweet potato, you’ll end up with purple coloured little balls. You could do that, if you want, for something different. The addition of pandan juice (which is not optional) will give you a lilac-ish coloured dough.

Sweet potatoes should be easily available in supermarkets and grocers.

It is used to make sticky type desserts, like the Japanese mochi and our kuih kochi (recipe soon).

Glutinous rice flour will be found in East Asian type stores and most definitely online. I get it from my local Korean, but here’s my  Amazon affiliate link for the brand I use, if you want to get it online.

Gula melaka is the palm sugar that’s commonly used in Singapore, Malaysia and Indonesia. It’s more often than not, made from the flower buds of the coconut palm.

Gula melaka is very dark and hard. It is intensely rich and sweet with toasty, caramel flavours.

Here’s my Amazon affiliate link for one of the brands I use. The image below is an old one of gula melaka that one of my sisters got me, from Malaysia.

Pandan flavour is non negotiable in making authentic and traditional onde onde. It’s not optional, so you really, really want to get your hands on it.

The pandan leaf has a wonderfully, sweet aroma with dashes of freshly cut grass, and is a very common ingredient in South East Asian cooking, for flavouring both sweet and savoury dishes.

The aroma of pandan leaves is activated by heat. At room temperature, all you get is the smell of grass. So don’t worry if that’s all you’re getting from it initially.

If you’re in the UK, frozen pandan leaves can be found in many local Chinese grocers. I assume the same must be the case in many other countries. And if you do Amazon UK, you can get fresh pandan leaves via Prime if you need it urgently! There are a few sellers, but this is the one I’ve bought on numerous occasions (affiliate link).

To extract pandan juice from the leaves, we cut the leaves with a pair of scissors, and blend them with some water in a blender.

Then you strain it into a bowl or jug with a fine sieve, squeezing the pulp to get every last drop.

If you can’t get pandan leaves, the Indian kewra makes a pretty good substitute.

As a last resort, you’ll have to make do with pandan extract, available in the baking aisle and most certainly online. I’m not a fan of its artificial aroma, but thankfully, I’ve always been able to get pandan leaves. I even used to grow them.

As you can see from the images, the cooked onde onde balls are coated with freshly grated coconut.

If you can get it fresh, lucky you! I have to depend on the frozen kind from my local Pakistani shop. There is only one small downside to this, the grate isn’t as fine as I’d like it to be, but in every other aspect, it’s perfect. I usually pulse it in a chopper just to get it a little finer.

If you can’t get fresh or frozen grated coconut, desiccated coconut will work too, but we have to plump it up with a little coconut milk. I’ll tell you how to do it in the recipe card below, just as we did with sambal goreng.

How long will they Keep?

Onde onde are best eaten on the same day that they are made. However, leftovers can be kept in an airtight container, in the fridge and eaten within 24 hours. Reheat gently in the microwave for10 – 20 seconds, depending on how many you have. If it’s only a couple, 10 seconds is more than enough. Don’t burn your tongue with that hot filling!

You can also freeze cooked onde onde and consume within a month. Defrost on the kitchen counter for an hour, then gently reheat in the microwave for 10 -20 seconds. Keep an eye on them.

How to store Uncooked Onde Onde?

You can dust them with a little glutinous rice flour and store in an airtight container. They are best cooked within 24 hours as the dough starts weeping.

Cook as in the instructions below, straight from the fridge.

You can also freeze them. Open freeze on a baking tray for an hour, making sure they’re not touching each other. Then place them in an airtight container or in a zip lock bag and freeze for up to a month, squeezing out excess air.

You can cook them straight from frozen.

And that’s it! Ready to get cooking?

If you enjoy the recipe, drop me a comment and let me know. Feeling like a star? Don’t forget that 5-star rating!😉

If you make this recipe, post it on Instagram and tag me @azlinbloor and hashtag it #linsfood.

Kuih Tart
Pineapple Tarts or Kuih Tart in Malay, are the personification of the festive cookie in Singapore and Malaysia; melt in your mouth shortcrust pastry shells filled with homemade pineapple jam.
Check out this recipe! 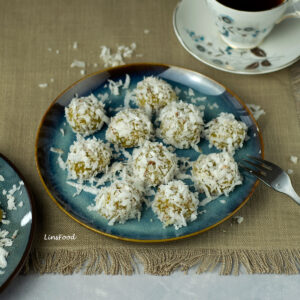 Shape and Fill the Onde Onde

Cooking and Finishing the Onde Onde