Skip to content
Bak Chor Mee recipe, a much loved noodle dish found in hawker centres all around Singapore, is a singularly Singaporean fare. A bowl of noodles served with meat, homemade sauce, stock/soup and a whole lot of toppings.
Jump to Recipe Print Recipe 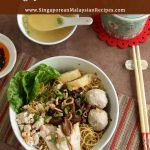 There are noodles a-plenty, of course, all over East and South East Asia, but the way Bak Chor Mee is prepared and served, with its stewed mushrooms and various toppings, puts it in a class of its own!

What is Bak Chor Mee?

Ask a handful of Singaporean Chinese what their favourite way of eating Bak Chor Mee is, and chances are, you’ll get a few different answers. Different noodles, different toppings, with soup or no soup, spicy or not, and that’s probably only half of it!

Homemade Bak Chor Mee is a Labour of Love

I have to be honest, unlike the super easy Char Kway Teow, Bak Chor Mee does takes a little bit of an effort; call it a labour of love. There are a few parts to it: the stewed mushrooms, the soup, the meat, which needs marinating and cooking, the sauce and the garnishes.

I’ll break the steps down for you, to make it all doable. We also make life easier by marinating the meat and soaking the mushrooms the night before.

I admit it, the first time I ever made it, over 20 years ago, living alone in London, it took me 4 and a half hours!

Don’t panic, I did also make the fishballs and meatballs from scratch at the same time! To set your mind at ease, these days, actual hands on time for me is only about 30 – 45 minutes.

In my recipe, you’ll find that I’m giving you the option of making a pork based Bak Chor Mee, as is traditional, or a chicken based one.

The reason for this is that I have many readers from all over who observe kosher rules or who are Muslims. And I know they would just love to try this recipe!

Besides, more and more Chinese establishments in Singapore and Malaysia are going halal to capture the Muslim market. This is especially huge in Malaysia, naturally.

Read through the Recipe First

To make the recipe easy to follow, I’ve divided the ingredients and the method up accordingly. So read through the recipe first, to get your head around what you need to do.

Towards the end, some of the steps will want doing simultaneously, like blanching the noodles, cooking the meatballs and the meat. But here’s a summary, which I wish I had all those years ago (!):

It’s easy to get ahead with bak chor mee. While the actual serving wants to be done before eating, all the components can be made earlier.

And because we certainly do some of the prep work the day before, even if you wanted to cook it fresh, you’re almost a quarter of the way there.

You can make Bak Chor Mee with any type of noodles you fancy. I like egg noodles best for this but rice noodles work well too for a gluten free version (remember to use a gluten free soy sauce like Tamari). In Singapore, the options can be mind boggling:

If you are using dried noodles, always follow packet instructions for serving and cooking times as they can vary. A rough guide though would be 75 g (2⅔ oz) per person of dried weight for egg noodles, to be cooked for 4 minutes.

Fresh noodles – about twice the weight and they only need about a minute of cooking time.

I have so many sambals and chilli oils over at LinsFood. But if this is your first time making bak chor mee, I would suggest that you cheat and use shop bought Chinese chilli oil.

However, if you do fancy making your own (it can be kept in the fridge for 2 weeks), here are some options from LinsFood. Apologies that they are not here:

Again, get them from an Oriental store to make life easier. If you can’t find them, and want to make them, do it days before and freeze, to make life easy on the day. Then, all you need to do, is thaw for an hour before cooking as in the recipe.

Click on the images below for the homemade recipes. Once again, they are still on LinsFood.com.

Same again, use shop bought. But if you want to make it, just get some pork belly, cut it up into little cubes, dry well and fry for a couple of minutes, with no added fat, on medium heat, until crispy and golden brown. Drain and set aside. The lard pieces and fat can be stored for weeks in a clean jar.

Here’s my recipe if you fancy homemade. But these should be found easily in Oriental stores. And they are a handy topping for so many things, whether it’s stews, salads or other noodles like the Malay Mee Rebus.

Chinese Black Vinegar is, as its name suggests, a very, very dark vinegar. It is also quite commonly known as Chinkiang vinegar and has a very deep character, is a touch smoky with hints of sweetness right at the back of it all.

Click here to read more about it and for how to substitute it.

How many calories in Bak Chor Mee?

This is a question I’ve been asked many a time when this recipe was still on LinsFood.

You can see from the recipe card below, it packs a fair amount of calories and fat. I personally don’t think 525 calories is a whole lot and when it’s a complete meal.

Also, this is a special treat, probably for the weekend, when we all tend to eat a little more. Right?

That’s about it. Now, the only thing that’s left to do, is the cooking itself!

Have fun folks, and if you are/were from Singapore, I know you’ll be jumping for joy with this recipe. If this is new to you but you love noodles, I hope you’ll come to love Bak Chor Mee as much I do!

♥ If you like the recipe and article, don’t forget to leave me a comment and that all important, 5-star rating! ? Thank you! ♥ 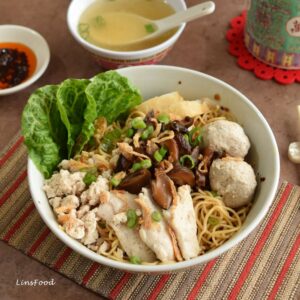 Sauce for Noodles PER BOWL

Bringing it all together