Skip to content
Quick and Easy recipe for Char Kway Teow, a Chinese Fried Flat Rice Noodles, found and loved all the way from Penang down to Singapore.
Jump to Recipe Print Recipe 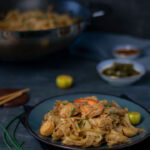 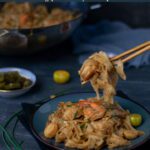 Char Kway Teow is Singaporean and Malaysian Zi Char comfort food at its best. Flat and wide rice noodles are flash fried with just garlic and chilli and filled with any kind of protein you fancy.

What in the world is Zi Char?

Zi Char is a Hokkien term. It refers to Chinese food stalls found in hawker centres and kopitiams (coffee shops). These stalls may specialise in just one kind of dish, say Hainanese Chicken Rice (recipe soon), for example, or Bak Chor Mee (click for homemade recipe). Or it can sell a variety of different dishes.

Oh, Hokkien is a Chinese dialect that comes from, and is widely spoken in, South East China. This is where a big portion of the Chinese immigrants came from in the 19th century.

You can read more about the various local ethnic groups in Singapore and Malaysia here.

Hawker centres, in case you’re wondering, is a collection of food stalls selling a variety of different foods. Traditionally, these were outdoors (mostly under cover) and represented the local cuisines. These days, they tend to be food courts and air-conditioned.

The name Char Kway Teow is also in Hokkien.

I see some food sites calling Char Kway Teow a South East Asian dish. It’s not, really. I suppose geographically, but that’s about it.

Char Kway Teow is a Singaporean and Malaysian dish of Chinese origin, like the chicken rice and noodles mentioned above. Sure, you’ll find variations of it in the southern parts of Thailand and certain Indonesia, but that’s because of the proximity of these countries. After all, the Thai border is only a stone’s throw away from Penang, where it most likely originated.

These fried rice noodles started life as something the fisherman would throw together using whatever leftover catch they had, but more often than not, with cockles.

Char Kway Teow with cockles is often also called Penang Char Kway Teow, because that’s where it’s originally from. However, remember Singapore and Malaysia were a single country until 1965? Well, it didn’t take long for the cockle kway teow to make its way down south. It’s definitely one of my favourite hawker foods.

Getting hold of the flat rice noodles are probably the trickiest part of this recipe, depending on where you live. What you want is a Chinese grocer or shop/supermarket. I am within walking distance to a Chinese shop as well as a Korean supermarket. The latter doesn’t sell these noodles, so a Chinese seller is your best bet.

If you don’t have a Chinese grocer nearby, go online. That’s your best bet.

Here in the UK, the kway teow noodles tend to come in packets of 400g (14 oz), and they are folded over. They are usually in fridge or freezer section. This amount should be enough for 4 people, bearing in mind that we will be adding protein and vegetables.

You want to soak your noodles in hand hot water for about 10-15 minutes until they’re pliable enough to untangle without breaking too much. The noodles are going to break, no two ways about it, we just have to minimise the breakage.

However, if you are lucky enough to get these freshly made, like we used to, from a wet market, you definitely want those. Soft and silky, they are less prone to breaking.

Be sure to get all your ingredients ready because the actual cooking time is pretty quick.

Besides the noodles, this dish is pretty straightforward in terms of the other ingredients. Let’s take a look.

Beansprouts are always the vegetables of choice in many, if not most, noodle dishes, and Char Kway Teow is no different. In the recipe here, I’ve only gone with that.

But I also love adding spinach or pak choi from time to time (I cook kway teow a lot).

You can use whatever protein you like, sub them with the same amounts. Here are some ideas:

The fishballs I use are homemade, but the puffed tofu are shop bought. And they should be found in most East Asian stores, not being restricted to only the Chinese ones.

If you fancy making your own fishballs, click here for the recipe on LinsFood.

Puffed tofu are tofu cubes that have been drained of as much liquid as possible, then fried, whereupon they puff up. They soak up flavours incredibly well.

You can always use fresh tofu for this. Just cube them, and lightly fry them in a little oil to crisp up before adding to your noodles. This is so your tofu doesn’t fall apart when frying the noodles. And they’re also tastier! Or, you could just leave the tofu out and use something else, see blow for suggestions.

We use 3 different kinds of sauces to cook this noodle recipe. If you’ve been a long time follower of LinsFood, you’ll be very familiar with the various soy sauces that are essential in a South east Asian kitchen: light, dark and sweet.

In our char kway teow, we’ll be using light soy sauce, sweet soy sauce and oyster sauce for the flavour base.

Light soy sauce is thinner and lighter in colour the the others. It is obtained from the first pressing of the soybeans, and its overriding flavour is that of saltiness.

Light soy sauce is used in place of, or in conjunction with, salt, and is also added to dipping sauces, whatever their East or South East Asian origin.

Many people associate this with Indonesian cooking, as it is often sold, in the West, as Ketjap Manis (Indonesian spelling). We call it Kicap Manis in Singapore and Malaysia, which is how it is spelt in Malay.

Sweet soy sauce is extracted after a long brewing time but it is made with lots of palm sugar or molasses. It is mainly used as a cooking ingredient, not just in stir-fries but also to deepen stews and curries.

Oyster sauce is made with oyster, salt, and sugar and is salty and a little sweet. When buying oyster sauce, be sure to look for one that has much oyster extract as possible.

You can make vegetarian char kway teow very easily. Lose the oyster sauce and sub it with dark soy sauce.

Then just use whatever vegetables you fancy. Besides beansprouts, you can use spinach, pak choi, carrots, mangetout, sugar snap peas and mushrooms.

And on that note, shall we get frying?

If you like the recipe and article, don’t forget to leave me a comment and that all important, 5-star rating! Thank you!

Mee Rebus Recipe
Mee Rebus is a delicious bowl of egg noodles in a curry sauce topped with eggs, chillies, crispy onions, tofu and anything else your heart desires!
Check out this recipe!

Bak Chor Mee (肉脞面), a very Singaporean Bowl of Noodles
Bak Chor Mee recipe, a much loved noodle dish found in hawker centres all around Singapore, is a singularly Singaporean fare. A bowl of noodles served with meat, homemade sauce, stock/soup and a whole lot of toppings.
Check out this recipe!

Gado-Gado Recipe (Indonesian Salad with Peanut Sauce)
Gado-gado recipe, an easy mixed salad from Indonesia, made up of cooked and raw items, served with a delicious peanut sauce, like satay.
Check out this recipe!

All Other Prep Work

If using fresh tofu, cut them up into little cubes. Then fry them in a little oil (about 2 Tbsp) in a frying pan, over medium heat to crisp up before using.