Skip to content
Aromatic Biryani Masala recipe, easily made at home. Great for that extra flavour in biryanis, and can also be used as garam masala.
Jump to Recipe Print Recipe 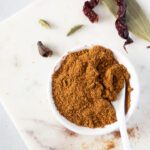 This homemade biryani masala is going to spice up your life like never before! There is nothing like a freshly made spice mix to take your dishes up a notch.

What is Biryani Masala?

It is an aromatic spice mix for cooking biryani. It contains many of the spices that we use in cooking South Asian dishes, and a little more, like black cardamom, ajwain and mace.

If truth be told, you don’t really need a biryani spice mix per se. Think of it like garam masala, you don’t have to use it, but if you do, it enhances your biryani and deepens the flavour.

Many cooks are perfectly happy using the usual ground and whole spices like cumin, coriander, turmeric, chilli powder, and black cardamom. However, many also like to use a ground spice mix that includes all these whole spices and more. It’s a masala that has high and low aromas and a plenitude of flavours.

You can also use this biryani masala as garam masala when a recipe calls for it. They share similar ingredients with the odd difference, namely the Kashmiri chillies.

Growing up in Singapore and Malaysia, many of us are used to spice mixes. When I was young, we would get our wet masalas freshly ground by an old Indian lady at the market. I have many memories of my granny sending me down with a specific order, depending on what she needed the masala for. More fennel, less chilli, more coriander, and so on.

In my first year in the UK, I lived in West Ealing, a very cosmopolitan area. My local grocer, 2 minutes down the road was run by Mr Ghulam and sometimes, his wife. I spent a lot of time at Mr Ghulam’s shop. You can read more about this over on my Kashmiri Cuisine page on LinsFood.

I used to moan to them that every biryani masala was just too spicy (and I’m a spicy kind of girl!).

So one day, they sat me down, and over a cup of masala chai and samosas, proceeded to tell me how to make my own. And then, the following Sunday, I popped down to cook biryani with Mrs Ghulam; that was the day I stopped using ready made biryani masalas.

I’ve tweaked the Ghulams’ biryani recipe a little over the years, as one does. I’m not a fan of nutmeg, and leave it out altogether, although I do use mace. I also find black cardamom a little overpowering, so only use 1 in my biryani spice mix.

So it’s pretty easy, you just have to source out all the ingredients first. The black cardamom is probably the only thing you will have to make an effort for. I’m lucky with where I live, we have all sorts of grocers and supermarkets, I’m spoilt for choice.

You will also need a spice mill, or a coffee grinder.

A slightly deeper look at some of the spices mentioned above:

Cinnamomum tamala in Latin, the Indian bay leaf is quite different from the more common Mediterranean laurel bay leaf.

Known as tej patta in Hindi, they are longer and thinner than the regular bay, and are not herbal at all. The Indian bay leaf has cinnamon and clove aroma and flavour.

The regular bay leaf is not a substitute for the Indian bay, having a different aromatic composition. However, I am a huge fan of the Mediterranean version, and quite often use it in South Asian and Middle Eastern recipes too. If you don’t have access to tej patta, leave it out altogether. Or use a regular bay just for the fun of it!

At just 1000 – 2000 Scoville units, Kashmiri chillies are super mild chillies, and are grown for their vibrant red colour and fruity flavour. So don’t worry, our biryani masala isn’t going to be spicy!

Anyone in the US, this means just ground up dried red chillies, with nothing else. What is called cayenne powder in your neck of the woods.

The black cardamom is a dark brown colour, and much larger than the common green cardamom. Known as the Queen of spices, it has a very commanding presence with its smoky and woody aroma from being dried on an open fire. It adds an earthy depth to our biryani masala and whatever recipes it’s used in.

There are actually two kinds of black cardamom, but the one we are concerned with, called badi elaichi is amomum subulatum. It is also known as the Nepal cardamom and Bengal cardamom.

If you are going to regularly cook Indian and Pakistani dishes, then you really want to get your hands on the black cardamom.

Ajwain seeds are also known as carom seeds and Bishop’s weed. Native to southern India, they are used in many cuisines around the world, including Ethiopian and Afghani.

They have a slightly peppery, thyme-like aroma, and for Singaporeans and Malaysians, if you think you’ve never come across it before, think again. It’s the spice used in Murukku. So if you’ve eaten murukkus before, you’ve definitely had ajwain seeds.

In fact, that’s what my kids identify it with, and Bombay Mix, the murukku and nut mix sold in the UK. They add a lovely lift to our biryani masala.

Mace blades are the outer covering of nutmegs which are carefully removed and dried in the sun before being used. They are a deep, burnt orange colour and have a tangy and lemony aroma with traces of nutmeg.

They should be easily available in the spice aisle of your supermarkets.

And this is what we’ll be doing:

If you want to make your biryani masala with ground spices, hey, I’m not going to judge.

And on that note, shall we get grinding?

If you like the recipe and article, don’t forget to leave me a comment and that all important, 5-star rating! Thank you! 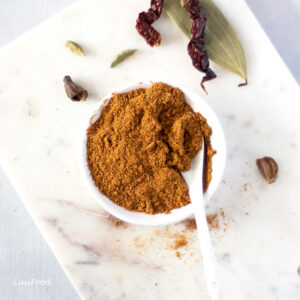